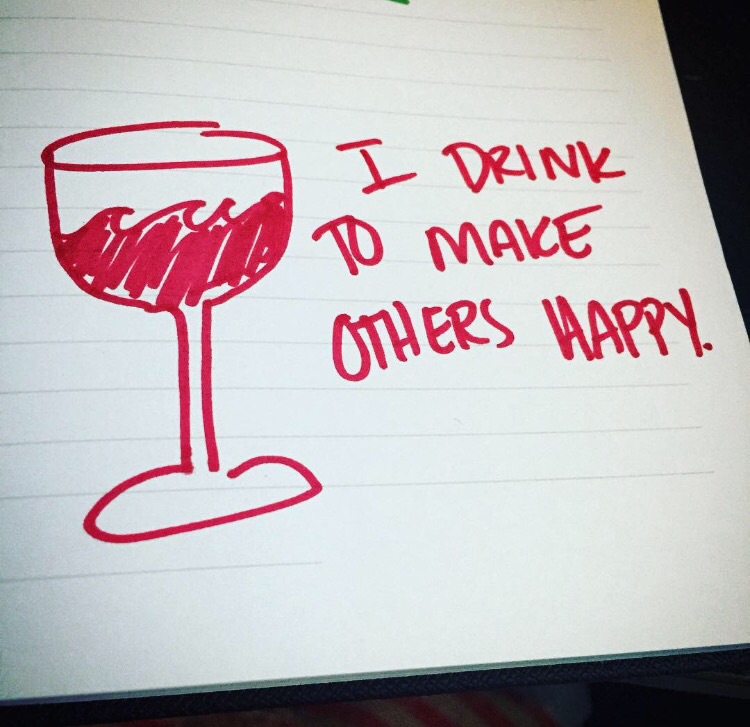 Here I am at day 5! It has been quite a whirlwind of a week with my shiny, new sobriety tools. I’ve really had to work on yielding my surrender sword. The awareness (presence) axe has been pulled out many times.

I’ve also been working really hard on observing my thoughts and feelings without labeling or judgement. This has required a bit more work on my part. Old reflexes die hard.

For instance, when thoughts about drinking, and then fears about relapsing, creep into my brain, fear shoots through my body. Then my thoughts try to make up some storyline—where, when, how I would relapse. This whole picture starts to paint itself in my mind, and then my body starts to freak out because it starts to believe it.

So I’ve really had to work on observing the thoughts without getting angry and frustrated and judgmental, just remembering that their arrival is NATURAL at this point in my sobriety. Thoughts of drinking are nothing but a knee-jerk reflex. Accepting them without getting all worked up seems to really strip them of any power.

I also work on remembering that they are only a fiction of my imagination and that I am no defined by the story of my past or my imaginary future. This helps bring me back to the present moment—a moment where I am sober.

Aside from drinking, I’ve really had to work on staying present with a lot of things. It’s good thought, because it gives me the chance to really exercise my sobriety muscles—the spiritual root of my drinking problem.

Small stuff, like when I knee-jerk to judging myself for the house being a little dirty in the corners (“Ah, yes, here is an old thought pattern. Ok, makes sense, but the state of house doesn’t define me right now, and I trust it will get taken care of when need be. Now, back to the present moment. What am I doing?”) Not allowing myself to get distracted while working on something (like an article, or this post). Not dwelling on the Sierra situation. All kinds of stuff.

Cool side effects since sobriety this week. House and room have stayed really clean! I really think when things get messy it’s because I’m living in the future (huge habit of mine). I get ancy about productivity. I think “oh gosh, I gotta get to doing that” then I leave crap in my wake instead of just dealing with it then. Interestingly enough, it seems the more I slow down and focus, the more I get done! And then I’m not dwelling on what I didn’t do because I was having anxiety about the future. It’s always this battle between the past and future and the mess or leaving stuff to get done is a symptom of that.

In fact, I’m experiencing a battle right NOW. I have this weird anxiety about how I ‘should’ be at Sierra, or getting ready to ride Sierra, because I need a photo for Instagram for the Journal. The SHOULD is very real right now emotionally. I know this is because of my very strong OBLIGER personality.

Why do I have a bad case of the SHOULDS right now? Because I feel like if I don’t go on this powder day I’m dropping the ball on our NONEXISTENT contract with Sierra. I don’t even WANT to snowboard right now!!!! But I feel like insane pull to meet these expectations that I’m assuming from others. Yes, my people pleasing is what drives so much of my action and emotion. Crazy.

I know for a fact this emotional and mental reflex has driven me to drink MANY times. The Maddie Bowman day—boom! Felt like I was not living up to expectations and therefore people were judging us (story made up in my head because I was judging myself) then I got so emotionally drained from this story that I started sneaking alcohol at Sierra and proceeded to get hamboned behind Meech’s back!!!!

Hmmmm other times. Drinking because I feel like my boyfriend enjoys my company, and sexuality, when I drink. This has led to my relapse many times. This is a particularly hard one for me to swallow, and one where my mind and body really conflict. BIG conflict.

Mentally I tell myself I know he loves me no matter what, and supports me no matter what choices I make. But I know emotionally I don’t believe it at all. I really, deep down think (I wanted to write ‘know’ there) that there are elements of my drinking personality that he enjoys.

First off, I tend to be more sexually aggressive and open when I’ve been drinking. Of course, he directly benefits from this.

Also, I think when I drink it makes him feel less alone in his own drinking. I don’t really care about his drinking. Or do I? Sometimes I’m not sure. He’s not as bad as I am, but I think he drinks more than the average joe. I guess I’m still in limbo about how I feel about his drinking.

I also think I feel a little bit of guilt for coming off as a fun, controlled drinker when we started dating, only to turn around and be like ‘just kidding, I’m an alcoholic!’ a year down the line. Like a broken promise or something. Oh boy, is that OBLIGERY or what, hah.

One thing that he’s been amazing about, however, is not making me feel ashamed for my drinking with him. He’s honestly held me and pulled me through horrible, terrible relapses many times. His support has meant so much in those times, and I know he believes I will overcome whatever spiritual malady this is. He’s believed in me when I didn’t believe in myself, and that has helped nurture the soil from which my seed of hope has sprouted! Someday I’ll tell him how much this has meant to me, but I don’t feel ready yet.

Wow. I did NOT expect to write about my boyfriend’s impact on my drinking, but I really feel like I stumbled upon a knot in my sobriety that I need to kneed out. Like with some real spiritual massage.

Haha. I feel like this blog is my therapist right now.

“So Laura, tell me what else about your obligery nature do you think drives you to drink?”

I imagine my blog pushing its spectacles in, waiting for my response.

But it’s good, I feel like I’ve stumbled upon some new realizations that I need to work on. This is great timing too, because tonight I will be joining Karl for a birthday party of his good friend’s that I know will involve lots of booze. I could do as the AA folk do and avoid because of my infancy, but I’m done running away and crutching on escape (my favorite way to deal with shit). I walked into the bar with my tools held high earlier this week and everything went well! It wasn’t until I was blindsided that I had a weak moment.

Sure, I have tiny creeping fears and anxieties about relapsing tonight. Mainly because I’ll be around new people who are important to Karl and I’m an obliger and want to impress and feel like booze knumbs the awkward feelings inside. But you know what, that’s an imaginary future that I’m making up. I’ve got my shiny new set of tools and, in fact, I am going to see if I can pick up some more!

Settled! I’m NOT going snowboarding today! Rather, I will do lots of sobriety and spiritual workouts to get extra strong for tonight. And I am going to have a blast. Sober. Wow. I am beginning to feel very much at peace about this.